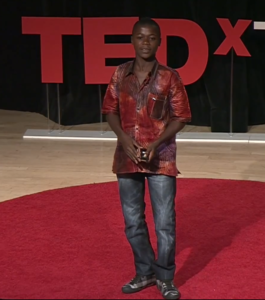 Thomas Edison once said, “To invent, you need a good imagination and a pile of junk.” Kelvin Doe, a teen in Sierra Leone, spent the better part of his youth digging through trash bins in search of electronics parts. Finding the junk was relatively easy. Figuring out how to build functional electronic devices with that junk required great imagination and intense focus of mind.

Doe’s mentor, David Sengeh, says that "Kelvin learns by making." He reverse engineers electronics, taking apart broken gadgets to learn how they work. He then uses these parts to build new electronic devices.

When Kelvin was fourteen-years-old he taught himself how to repair radios because, as he explains, “a radio is the most prized asset in Sierra Leone.” He fixed radios for people in his city at no charge until demand overwhelmed him, and he chose to move on to other projects.

Next, because electricity in Sierra Leone is unreliable, Kelvin figured out how to build batteries. Kelvin's family and friends now have electric lights thanks to him.

Kelvin then built his own radio station. He searched out scrap parts and, by trial and error, constructed his own FM transmitter, circuit board, three channel mixer, microphone receiver, and electric generator. On his radio station Kelvin took on the moniker “DJ Focus” because, he said, "I believe if you focus you can do any invention perfectly."

Last year MIT invited Kelvin to spend three weeks on their campus, where he dramatically expanded his knowledge. Soon after Kelvin’s MIT visit, TED conferences invited him to give a TEDx Teen talk, in which he discussed his life and methods and said his “passion comes from the inside, not the outside.”

“My happiest time is when I am making electronic things for myself, my family, and my community,” Kelvin said. He urged leaders to “look for young people with talent, creative abilities, and passion in all places . . . and support these young people,” because “you never know . . . you might find the next DJ Focus."

Kelvin Doe’s active-mindedness is remarkable and his enthusiasm is contagious. (You must watch the video.) He shows what is possible to someone who uses his mind to the fullest.

Expect great things from him. Be inspired by him. Use your mind like DJ Focus.