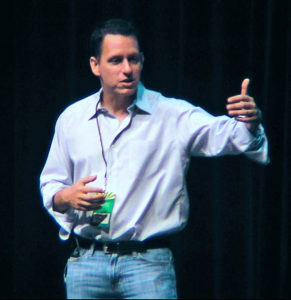 Peter Thiel, who founded PayPal in 1999 and sold it to eBay for $1.5 billion in 2002, knows something about entrepreneurship. Among other things, he knows that entrepreneurs do not always need a college degree to succeed—for example, Steve Jobs, Bill Gates, Michael Dell, Ralph Lauren, and Mark Zuckerberg dropped out of college—and he knows that the skills necessary for successful entrepreneurship can be learned by engaging directly in business.

Toward cultivating these skills in entrepreneur-minded youth, Thiel launched a fellowship program a few years ago, with some radical initiatives. As the Wall Street Journal reports:

One highly scrutinized foundation initiative, known as the 20 Under 20 Thiel Fellowship, asks potentially college-bound teens and undergraduates to reconsider higher education and drop out—at least for a time—to learn by doing, especially by forming companies with a change-the-world objective.

In its third year, the fellowship has already granted its $100,000 prize to 64 winners who have “started 67 for-profit ventures, raised $55.4 million in angel and venture funding, published two books, created 30 apps and 135 full-time jobs.”

Knowing that putting money in the hands of creative people can help them develop revolutionary products, Thiel invested in “startups—including LinkedIn Corp., Yelp Inc., SpaceX and Yammer—that had been formed by PayPal co-founders and employees.” He was also the first outside investor in Facebook.

Thiel stresses that the source of all innovation and a mark of successful entrepreneurs is independent thinking:

One thing I ask fellowship candidates to do when I interview them is to tell me something true that nobody agrees with them on. The business version of this is: "What is one great business that nobody has built?" I think they should all try to find a problem that nobody else is solving. Do not find a conventional problem that many people are working on. Find one that nobody is working on.

Kudos to Thiel for fostering such virtues in today’s youth. And keep an eye on the young entrepreneurs involved in his programs. If their motive is profit and their MO is independent thinking, many of them will be hugely successful.