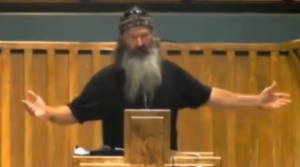 It seems like, to me, a vagina—as a man—would be more desirable than a man's anus. That's just me. I'm just thinking: There's more there! She's got more to offer. I mean, come on, dudes! You know what I'm saying? But hey, sin: It's not logical, my man. It's just not logical. . . . Start with homosexual behavior and just morph out from there. Bestiality, sleeping around with this woman and that woman and that woman and those men.

Everyone also knows that the Bible—written in a time when crucifixion, slavery, and other acts of barbarism were common—contains other horrific moral advice. These are the same scriptures that (among other things) endorse the slaughter of women and children in warfare, say “witches” should be killed, and command that slaves willfully subject themselves to their masters.

That A&E has a right to work with whomever they choose is clear to anyone who understands rights. (Unfortunately, Ted Cruz and many conservatives are not in this category.)

Whether people profess belief in miracles and demons, or claim that sacrificing one’s values is good because Jesus said to or did so, or profess other nonsense based on the “authority” of ancient texts, if we value reason and life-based morality we must identify all such claims as absurd.

Let’s not hold Robertson to one standard and everyone else who spouts comparable nonsense to another standard. Whether the issue is homosexuality, self-sacrifice, the “evils” of money, or whatever, let our standard be not the “authority” of ancient texts or preachers who revere them, but the demonstrable requirements of human life on earth.