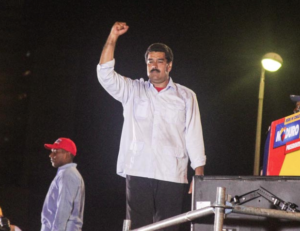 It’s as though Venezuelan president Nicolás Maduro turned to the villains of Ayn Rand’s Atlas Shrugged for inspiration. “Maduro seized control of a nationwide chain of appliance stores Friday,” accused the store managers of “usury,” and vowed to unload the merchandise at cut-rate prices, the Associated Press reports. “Leave nothing on the shelves, leave nothing in the warehouses,” he said. One of the “shoppers” described the situation frankly as “organized looting.”

Although Maduro and his supporters blame retailers for high prices, in fact government controls are responsible. As the Heritage Foundation’s “Index of Economic Freedom” reports, the nation is plagued by a corrupt legal system (characterized by bribery, fraud, and the like), routine violations of contract rights, profligate government spending, “regulatory encroachment on private businesses,” government controls of the labor market, government restrictions on trade, and constant threats of government expropriation of businesses. Oh, and the machinations of Venezuela’s central bank have pushed the rate of inflation to over 54 percent.

When Maduro clears the shelves and the warehouses in this “organized looting,” who will restock the shelves and warehouses again? Who will dare sell appliances or anything else in the country? What will happen the week after next?

Leftists never ask such questions, nor do they ask more fundamental questions about the factual requirements of human productivity, the thought that drives it, and the freedom required for man’s mind to function. Let Venezuela be a warning to the rest of the world.

View all articles by Ari Armstrong →
Prior to Concierge Medicine, My Access to Health Care Was Inferior to that of My CatNew Jersey Voters Elect to Violate Rights and Harm the Poor
Return to Top