Rights-Violating Police Raids and the Drug War that Spawns Them 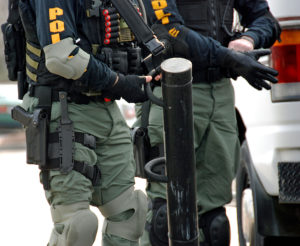 The Daily Caller describes a recent outrage caused by the government’s war on drugs: “On the night of June 27th, Los Angeles County deputies raided the home of Eugene Mallory and Tonya Pate,” an elderly couple. Police claimed they smelled chemicals used to produce methamphetamine, but they found no meth or meth-related items in the house. They did find some marijuana in the room of Pate’s son. According to the deputies, Mallory—an eighty-year-old man—pulled a gun on them; according to his wife, he didn’t. Either way, the police shot Mallory and killed him.

This is hardly the first time police have killed or assaulted innocent people in botched drug raids. Radly Balko has chronicled the rise of militarized police actions—spawned mostly by the “war on drugs”—in his new book, Rise of the Warrior Cop. (He summarized his findings in a recent talk.)

In the raid on Mallory’s home, police claim they were justified in killing Mallory because (they say) he pulled a gun on them. But what justified the police breaking into Mallory’s home in the middle of the night, weapons drawn? If we take seriously the principle that the only proper purpose of government is to protect people’s rights, the obvious answer is that nothing justified that action.

When people violate the rights of others in the course of producing or selling drugs—whether Ritalin or cocaine—then the government should step in. If a person damages others’ property, initiates violence, sells to children, or commits fraud, a rights-protecting government intervenes to stop and punish the rights violators. But simply possessing, growing, producing, or selling drugs to adults violates no one’s rights—and the government therefore has no proper business intervening. And this is true whether the police have probable cause of drug-related activity or, as was apparently the case with the Mallory raid, a flimsy pretext rationalized as probable cause.

It is high time for Americans to call for an end to this immoral “war on drugs.” Mallory should not have been killed, and nor should the next victim—or the next, or the next—in this illegitimate war share his fate.