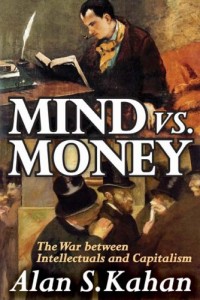 If, like most candid students of history, you recognize that capitalism (to the extent it has been instituted) has brought liberty, peace, and prosperity, but you wonder why the system has been so despised, this is the book for you.

In Mind vs. Money: The War between Intellectuals and Capitalism, Alan S. Kahan points out that in only one century out of the past twenty-five—the Enlightenment (1730–1830)—did leading intellectuals speak well of money, lending, profit making, and commerce (i.e., capitalism). The vast majority of intellectuals, over the vast majority of time, have detested capitalism and all it stands for. The worst hostility dates from the mid-19th century: “For over 150 years, Western intellectuals have been at war with capitalism,” writes Kahan, and “the consequences have often been disastrous for all concerned” (p. 3)—the consequences including tyrannies and policies that sap economic vitality.

In documenting his theme, Kahan proceeds chronologically, covering the ancients, medievalists, and moderns. Yet, he also organizes the material thematically, according to how he interprets each era’s distinctive attitude toward “money,” a catchall concept he uses to capture all private, profit-seeking economic activity. Kahan’s style is not polemical but largely expository; he is sympathetic to capitalism and opposes irrational assaults on it, but his main aim in the book is simply to present the facts of how dominant intellectuals have treated it. The ancients, he finds, advised: “Don’t make money; just have it.” The medievalists amended that only slightly, to say: “Don’t have or make money; just give it to the poor.” Finally, the moderns (egalitarians) insist: “Don’t have (or make) more money than others” (pp. 31–32).

For Kahan, these three attitudes are distinctive only in a narrow sense; viewed broadly, they are variants of a deep-seated, persistent hostility to commercial activity. Kahan demonstrates that leading intellectuals, with rare exceptions, have lambasted moneymaking as low, base, crude, crass, “materialistic,” grasping, mindless, corrupting, filthy, ignoble, and selfish. Kahan performs best when describing how intellectuals have exhibited their bias; he’s less acute when explaining why they’ve done so.

Intellectuals, Kahan acknowledges, include not only philosophers and economists, but also novelists, playwrights, poets, and artists. Regardless of the medium of expression under study, he finds that . . .

View all articles by Richard M. Salsman →
Review: The Mark of ZorroReview: Notorious
Return to Top