Review: The Mark of Zorro 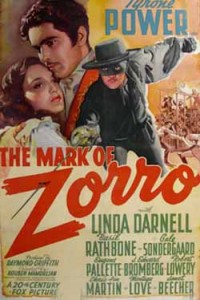 Some movies offer their audience the experience of an efficacious hero wittily fighting evil in a dramatic but benevolent world. The 1940 film The Mark of Zorro dazzles with such qualities. The film stars the dashing Tyrone Power as Zorro; Basil Rathbone, one of Hollywood’s most elegant and articulate villains, as Capitan Esteban; and the stylish Linda Darnell as the love interest, Lolita.

The story opens in sultry Madrid, where the “California Cockerel,” Don Diego Vega (Power), is training in the arts of war when he is suddenly called back to California by his father, the Alcalde (mayor) of Los Angeles. Diego reluctantly obeys, believing that he is leaving behind a life of adventure for a land “where a man can only marry, raise fat children, and watch his vineyards grow.” Arriving in California, Diego finds—teased out in clever and suspenseful ways—a land under the heavy heel of despotism. His father has been deposed and the new Alcalde, Don Luis Quintero, is a bloodthirsty weakling obsessed with extorting money through heavier and heavier taxes, aided by the cruel and vain Capitan Esteban.

After meeting the villains (and Don Luis’s lonely wife, Inez) Diego assumes his first disguise, Diego the fop. Now hidden are the real Don Diego’s quick, confident laugh, resolute bravery, and firm sword hand. These are replaced by a manicured hand trembling over a handkerchief and a dandy’s concern for scents and the latest satins and silks. Diego slyly tells Esteban that “swordplay is such a violent business,” then primps himself with his kerchief. Luis sneers to Esteban, “That’s one little peacock that won’t give us any trouble.”

After visiting his father, Diego learns that the former Alcalde and the other nobles will not rise up against the law, even if it is now an evil one. But Diego will, in disguise. The bandit Zorro is born. Keeping his new identity secret, Diego dons black hat and mask, and atop a black horse liberates taxes stolen from the peons while leaving behind his mark, a slashed “Z.” Zorro publicly vows to force Don Luis from power. . . .

View all articles by Scott McConnell →
Letter to the Editor
Louis Pasteur: A Light That Brightens More and MoreReview: Mind vs. Money, by Alan S. Kahan
Return to Top