The Beautiful Tree: A Personal Journey Into How the World’s Poorest People Are Educating Themselves, by James Tooley. Washington, DC: Cato Institute, 2009. 268 pp. $19.95 (hardcover). 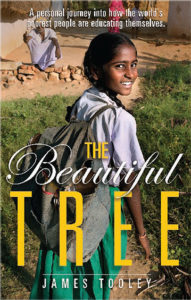 The Beautiful Tree is the inspiring story of James Tooley’s quest to discover “how the world’s poorest people are educating themselves.” Tooley begins his book by describing his serendipitous discovery of low-cost private schools for the poor in Hyderabad, India. While on an assignment for the World Bank to research the contribution of high-end private schools to the education of middle- and upper-income Indians, Tooley discovered that dozens of low-cost, for-profit private schools serve the poor in the slums of Hyderabad, and that parents choose to send their children to these private schools despite the fact that government schools are available for “free.”

When Tooley returned to the World Bank and told his colleagues of his amazing find, their responses were typical of those he would receive during the rest of his investigation. Many refused to believe that low-budget private schools existed. The few who acknowledged their existence attempted to dissuade Tooley from giving them much attention, because, in their view, these schools were “ripping off the poor” and were “run by unscrupulous business people who didn’t care a fig for anything other than profits” (p. 21). Tooley responded to such skepticism and cynicism by redoubling his efforts to learn about such schools. Inspired by what he found in Hyderabad, Tooley searched for similar schools in the slums of Nigeria, Ghana, and China. . . .