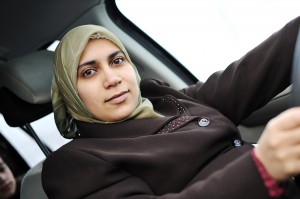 The theocratic regime in Saudi Arabia is an enemy of reason and human life on multiple counts, not the least of which is its constant effort to spread Islam across the globe and to destroy America and Israel by funding mosques and schools that “educate” children about the evil of infidels and the need to kill them.

And, of course, the regime’s assaults on all things civilized are not limited to westerners; the theocrats regularly assault people who are trying to live at least semi-human lives in Saudi Arabia as well. Fortunately, at least some of the assaulted are making an effort to resist at least some of the evil.

Today, for instance, Saudi activists are fighting the regime’s ban on women driving. Following similar protests in 1990 and 2011, the “October 26 Driving” campaign has created a petition calling for the government to lift the ban:

Since there is no justification for the Saudi government to prohibit adult women citizens who are capable of driving cars from doing so, we urge the state to provide appropriate means for women seeking the issuance of permits and licenses to apply and obtain them.

The petition has garnered over sixteen thousand signatures, and the website (which, unsurprisingly, was blocked in Saudi Arabia) calls for Saudis to show their support by displaying the “Oct26th” logo on their cars, championing the cause in social media, and teaching women to drive. In addition, the campaign asks women with international driving licenses to drive on October 26.

Madeha Al Ajroush drove in the first protest against the ban in 1990 and—despite being briefly detained, losing her job, and being denounced by religious leaders—she is an active participant in the October 26 campaign:

What is the Saudi “case” for barring women from driving? After the 2011 protest, Saudi “scholars” in association with the Majlis al-Ifta’ al-A’ala (Saudi Arabia’s highest religious council) issued a report claiming that allowing women to drive would lead to the same “moral decline” seen in other nations, by effectively eliminating the presence of virgins in Saudi Arabia and causing “a surge in prostitution, pornography, homosexuality, and divorce.”

There you have a clear indication of the intellectual sophistication of this savage regime and of the primitive, anti-reason, anti-life philosophy it embraces.

It is, of course, not the U.S. government’s responsibility to free the non-savage Saudis from the savage ones. But if the U.S. government were to eliminate the Saudi regime—as it should in order to protect Americans from the Islamists’ assaults and threats—at least some Saudis might be grateful.

Here’s to the Saudis struggling against their oppressive government. May they eventually succeed in ending the tyranny even if America never does what it should do.