Pat Robertson and His Creed: Devourers in Need of Rebuke 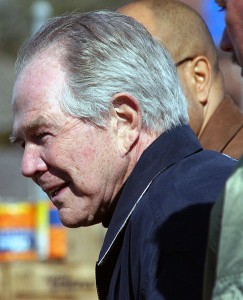 Recently, a financially struggling elderly woman wrote to Pat Robertson explaining that she has been tithing (giving 10 percent of her income to charity) since childhood and that she and her husband are still tithing despite his medical expenses. She explained that they “barely have any money” and are both “retired and living on a small pension and Social Security income.” She then asked Robinson whether it would be okay for them to apply money they normally give to charity toward her husband’s medical expenses instead.

Robertson replied that their medical and financial problems are the result of failing to give their tithes faithfully:

Read carefully what the Bible has to say in Malachi. He says prove me with your tithes and offerings. He says I will rebuke the devourer for your sake. Your husband has all these medical problems because the devourer has not been rebuked. You need to rebuke him. You give your tithes faithfully, and God said, “I will rebuke the devourer,” the person who is eating up your money and eating up your health. So you want to be healthy? That’s a promise in the Word.

There you have Christian mysticism and altruism laid bare. Robertson's message in plain English is: You should sacrifice because God said so. Your sacrifices are causing you pain? That's because you are sacrificing with insufficient faith. Sacrifice more faithfully, and God will solve your health problems.

Hopefully the elderly couple will ignore Robertson’s evil advice, stop watching his death-worshiping show, start thinking for and about themselves, and start using their money solely toward making their lives as comfortable and enjoyable as possible.

The only “devourers” in need of rebuke here are Robertson, mysticism, and altruism.

View all articles by Natalie Ogle →
Letter to the Editor
Morality Without GodCan You Tell the Difference Between Modern “Art” and Toddler Art?
Return to Top