Monsters University and the Virtue of Perseverance 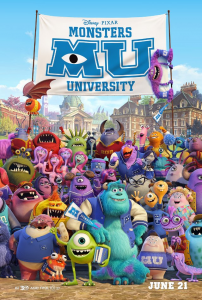 Monsters Inc.—the story of lovable monsters who learn to make children laugh rather than scream—is one of my favorite Pixar animated films and among my top films of any genre. I was therefore thrilled that Pixar (now owned by Disney) created a prequel, Monsters University, released this week on DVD. The new film is as wonderful as the first.

As its title indicates, Monsters University is the story of monsters who go to college in pursuit of their dreams. As with the first film, the two main characters are one-eyed Mike Wazowski and furry James P. “Sulley” Sullivan, featuring outstanding vocal performances by Billy Crystal and John Goodman, respectively. Mike and Sulley hope to become professional “scarers”—an occupation that involves scaring children in order to generate power for the monsters’ city.

As we would expect, the film portrays many of the typical aspects of college—studying and partying, the cliquish fraternity and sorority systems, intimidating college administrators, and the like—and it does so with Pixar’s well-loved and good-natured humor. As with several of its previous films, Pixar figured out how to make a film that’s equally enjoyable for children and parents.

Monsters University stands out as an exceptional film because it delivers a wonderful moral lesson for children as they begin their lives and for adults who may be looking for a change of course: the lesson of persevering in your career goals despite impediments you may face. (Spoilers follow.)

The film opens with Mike as a young boy visiting Monsters Inc., where he witnesses scarers in action and decides he wants to be a scarer when he grows up. So he works hard to get into Monsters University, then earns top marks in his classes. Meanwhile, Sulley slacks off and expects his family name and his natural scariness to carry him to success and fame.

An accident endangers both of their chances to become scarers—so they team up to compete in the Scare Games to prove themselves. Along the way, Mike learns to work effectively with others to achieve mutual goals, and Sulley learns about the importance of honesty and hard work.

In the end, with their careers on the line, Mike and Sulley figure out how to pursue their goals in a way that neither had originally anticipated.

The messages of the film are: Your life and your career matter immensely, so never give up on yourself or your goals. But to pursue your career successfully, and to overcome obstacles, you must approach it creatively.

Monsters University is a fantastic film with an important theme and laugh-out-loud fun for children and adults alike.