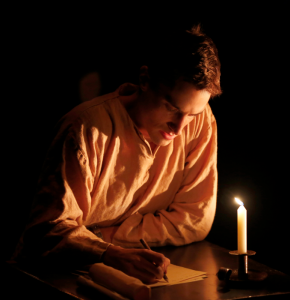 Jeff Britting, a composer and curator of the Ayn Rand Archives, has adapted Ayn Rand’s novella Anthem as stage play, which will be presented in New York City by the Austin Shakespeare Theater Company. Under the artistic direction of Ann Ciccolella, the production was originally performed in Austin, Texas in 2011.

Rand wrote Anthem in the summer of 1937 during a break she took from writing her novel The Fountainhead. Anthem was published in England in 1938 and in America in 1946. To date, more than five million copies have sold.

Anthem's Off-Broadway staging coincides with the 75th anniversary of the novella’s publication. The play previews on September 25 at the Baryshnikov Arts Center's Jerome Robbins Theater (450 W, 37th Street), and it opens there on October 7, running through December 1.

Recently Mr. Britting joined me to discuss the play and the novella behind it. —Robert Begley

RB: Hi Jeff, thank you for taking time to discuss the coming Off-Broadway production of Anthem. I know readers of TOS Blog are interested to hear about the play and how it came about.

JB: Well, thank you. Glad to talk about the show.

The idea for Anthem the play began over twenty years ago. I was assisting in the production of another Ayn Rand work, Ideal. I moved to New York and began working on producing the play with my partners. And as a way to raise money to cover some venture debt, we decided to stage Anthem for a limited run at the Lex Theatre in Hollywood. The script was written and directed by Michael Paxton, who had directed the stage debut of Ideal. The run was successful. People responded to the material.

Meanwhile, the effort to raise money for an Off-Broadway production of Ideal continued. And my hope was to work on another iteration of the Anthem show. Eventually, the decision to work on it further fell into my lap as my partnership dissolved. And people wanted to move on with other projects. Alas, our effort to mount Ideal was not successful. However, each day in New York City, when I took the subway to work, I thought of Anthem. Sometimes, I stood at the front of the E train, watching the tunnel ahead, imagining what Anthem would look like on stage.

Jumping twenty or so years later, Ann Ciccolella, artistic director of Austin Shakespeare, approached me with the idea of staging Anthem. She had heard my film score to Ayn Rand: A Sense of Life. And she said, I want to do Anthem as an oratorio. Well, I figured what she meant was a straight play with music. So, we began from there. That was in 2008.

RB: Obviously, to have been motivated to adapt Anthem as a stage play you must have been deeply moved by the story. Would you say a few words about how Anthem the novella affected you? . . .

View all articles by Robert Begley →
Toward a Shutdown to CelebrateU.S. Government Assaults a Supermarket, Institute for Justice Defends It
Return to Top