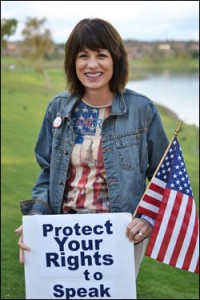 In 2011, Dina Galassini of Fountain Hills, Arizona opposed a $44 million bond measure for roads. She emailed 23 friends and asked them to make signs and join her in a street-corner protest, as an Institute for Justice (IJ) media release relates. Under Arizona’s campaign finance laws, her actions were illegal, and the town clerk sent her a letter “telling her to stop speaking until she had registered with the town as a ‘political committee.’”

Galassini said, “I was stunned to learn that I needed to register with the government just to talk to people in my community about a political issue. All I could think was, ‘How can this be allowed under the First Amendment?’”

Thankfully, on September 30, a U.S. District Court struck down the campaign laws forbidding her to speak about political issues unless she first jumped through a bunch of bureaucratic hoops. The same day, a District Court in Mississippi struck down similar laws there. IJ litigated both cases in support of free speech, and IJ is also litigating a similar case in Florida, which is headed to the Supreme Court.

IJ deserves support and gratitude for defending the right to free speech. And the courts (whatever the problems with the judges’ reasoning) deserve praise for having made the right decisions in these cases—decisions that uphold individual rights and Constitutional liberties.