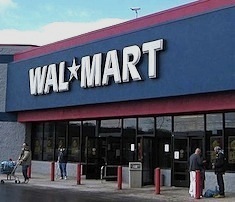 When government systematically confiscates wealth from producers and gives it to “welfare” recipients who didn’t produce it, should we be surprised that many recipients of the loot acquire a looter mentality?

People in 17 states found themselves unable to buy groceries with their food stamp debit-style cards Saturday after a routine check by vendor Xerox Corp. resulted in a system failure.

But in two Louisiana towns where (due to the glitch) the EBT cards showed no spending limits, SNAP users piled up huge orders at Walmart stores. They either checked out with the faulty cards, thus stealing the merchandise, or—after police arrived—left carts overflowing with food that store employees then had to restock. KSLA 12 reports that one woman

rang up a bill of $700.00 and only had .49 on her card. She was held by police until corporate Walmart said they wouldn't press charges if she left the food.

Although fraudulent use of EBT cards is a crime, both fraudulent and “legitimate” welfare stem from the same immoral premise—the notion that some people have a moral right to wealth produced by others.

Toward the achievement of a rights-respecting society—one in which government outlaws coercive looting rather than indulges in and promotes it—Americans should demand that their representatives work to end SNAP and all welfare programs.