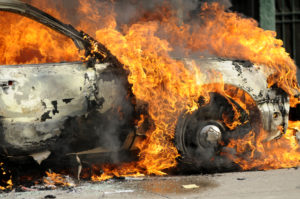 Earlier this month, protesters in New Brunswick, Canada—who for weeks “blockaded a staging area where an energy firm stores its equipment”—hurled molotov cocktails at police, destroyed six police vehicles, and fired at least one gunshot.

This “[v]iolence erupted as officers moved in to enforce a court injunction won by the company to remove the protesters' highway camp” that was blocking the company’s access to its equipment, reports BBC News. Police officers arrested more than forty “protesters” and confiscated weapons, including improvised explosive devises.

The leader of the New Brunswick Green party claims the anti-fracking activists “were simply trying to protect their right to safe water and the well-being of their communities through peaceful civil disobedience.” Regardless of any irresolvable disputes here inherent in the nature of “public” property, fracking, which takes place thousands of feet underground, does not threaten groundwater, and violent assaults on police are not “peaceful.”

Canadians and Americans who care about industrial progress and the rule of law must reject the irrationality and violence of such environmentalists and defend the moral rights of energy producers to produce energy.