War on Syria is Not the Means to Credibility and Security; War on Iran Is 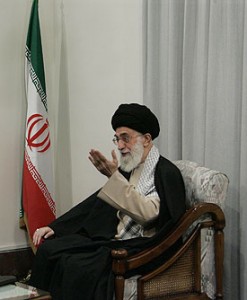 It is unclear whether the Obama administration will proceed with an “unbelievably small” military strike against the Syrian regime or plead with Bashar al-Assad to surrender its chemical weapons. One thing that is clear, however, is that to pursue military action in Syria as a means of stopping Iran’s nuclear weapons program—as former national security advisor Stephen J. Hadley proposes in a Washington Post article—would be idiotic.

Hadley writes, “Only internal pressure and the threat of U.S. military action will cause [Iran’s] Khamenei to accept a nuclear deal,” and he claims that U.S. credibility with respect to Iran will suffer if the Obama administration does not follow through on threats to retaliate over Assad’s use of chemical weapons.

If the United States wants to stop Iran from gaining nuclear weapons and from financing and aiding Islamic terrorism against America—which we certainly should do—then we should not fight a proxy war with Syria to gain “credibility” or to someday maybe threaten military action against Iran. Rather, the U.S. military should destroy Iran’s theocratic regime, along with its capacity to develop nuclear weapons. That way America would achieve both credibility and security.

View all articles by Ari Armstrong →
“Objectively Speaking” about 9/11 and IslamOn the Anniversary of 9/11, Relativism and Religion Still Paralyze American Self-Defense
Return to Top