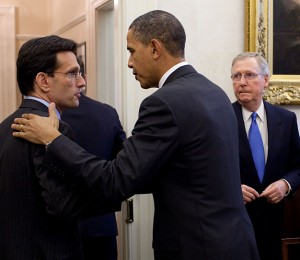 The hullabaloo relates to a bill passed September 19 to cut funding for the Supplemental Nutrition Assistance Program (SNAP) by tightening eligibility standards.

The bill hardly represents a “showdown” over SNAP funding. Leftist hysteria notwithstanding, Republicans support the program but want to run it “better.”

The Washington Post reports that Republican House Majority Leader Eric Cantor “said the deep cuts enacted Thursday were necessary because while most SNAP recipients need the assistance, there are too many people ‘that choose to abuse the system.’” And USA Today notes:

Agriculture Committee member Mike Conaway, R-Texas, said Thursday "we are not talking about eliminating the SNAP program." The goal of the bill, he said, is to "limit the public assistance program to those who qualify and close loopholes that have allowed people to game the system." The changes will help "keep the safety net intact for qualified families," he said.

Of course, the possibility of the House bill passing in the Democrat-controlled Senate is nil. And, as Fox News reports, “President Obama threatened to veto any bill that made deeper cuts than the Senate version”—which proposes to cut a mere $4.5 billion from SNAP.

So what is the relevance of this dead-end House bill? Although Republicans are posturing as though they have taken some kind of a principled stand on the matter, they have done nothing of the sort. They are quibbling with Democrats over details while disastrously agreeing with them on the fundamental: the question of whether such a program should exist at all. Both sides want to preserve and perpetuate SNAP, which morally should be abolished.

SNAP is not merely too large or inefficiently run; it is an immoral program. It forcibly takes money from people who earned it and redistributes that money to people who did not earn it. It violates people’s rights to keep and use their income as they see fit.

SNAP should not merely be tweaked or made more efficient—it should be phased out of existence. That way, the rights-violations involved in the program would come to an end, and those who currently receive food stamps would regain the natural incentive to be self-responsible, self-sufficient individuals who earn the money they spend on food—while, of course, retaining the alternative of turning to private charity insofar as they need handouts.

If America is ever again to become the rights-respecting republic it is supposed to be, Americans must come to see why SNAP and all such coercive wealth transfer schemes are immoral—and we must demand that our representatives end them.

View all articles by Michael A. LaFerrara →
“Social Justice” is an Assault on JusticeNo, Mariana, There Is No (State) Santa Claus Driving Technology
Return to Top