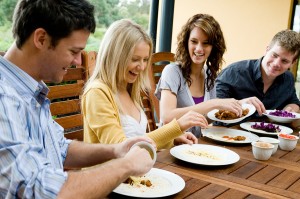 Had the satirical publican The Onion existed during America’s founding era, this is the sort of story it might have run: In New York City, it is a crime to serve dinner in your home for a fee. The “criminals” involved could have their kitchens shut down by the city’s health inspectors and be fined thousands of dollars for the “offense.”

America’s founders, who declared their independence from Britain in part because the Crown “sent hither swarms of Officers to harrass our people,” would have scoffed at the idea that consenting parties could not freely negotiate dinner arrangements on private property. If you’re not free to invite the people of your choice over for dinner on mutually agreed terms, then no liberty is secure.

But in today’s world, the fact that the government outlaws private dinner parties is widely regarded as acceptable. As Reason points out, a CBS affiliate even sent a reporter undercover to investigate these “crimes.” The city’s health department told CBS:

In New York City, people who offer meals to the public for money are considered food service establishments and need permits. The city does not allow meals to be served to members of the public in someone’s home.

Properly, the government exists to protect people’s rights—which means, in part, that it enforces criminal codes against violating people’s rights. But inviting people over for dinner does not violate anyone’s rights, regardless of whether the host charges for the meal.

The only rights violation in this case—the only moral crime—is the government’s use of force against rights-respecting New Yorkers.

It would astonish America’s founders to hear that the Land of Liberty has moved so far in the direction of tyranny that people can’t say “dinner is served” without fearing a raid by government agents. But that’s where we are.

It is time for Americans to learn what rights are and what they mean in practice. This is the only way to reverse the trend toward tyranny.

View all articles by Ari Armstrong →
Letter to the Editor
Rolling Stone Smears Defenders of Fossil FuelsMinimum Wage Laws: Immoral, Crippling, and Nevertheless Supported by Many
Return to Top