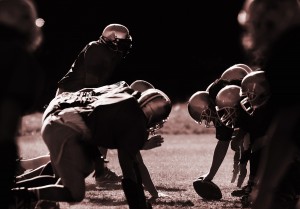 Less than a year ago, Koni Dole, a high school football player from Montana, broke his leg in the final game of the season. The injury resulted in the loss of his lower right leg.

One might reasonably assume that this injury ended Dole’s football career. But it didn’t.

As KAJ18.com reports, when doctors “informed Dole he had the choice of keeping his lower leg attached or amputating, which could improve his chances of continuing an athletic career,” Dole chose amputation, because “his dream was still to play football for Montana State.”

Last Friday, Dole returned, contributing to his team’s opening season victory with some outstanding defensive play—and two touchdowns. He said that stepping onto the field for the first time since his injury gave him “just an indescribable feeling.”

Cheers to Koni Dole for his triumphant return to high school football, and best success to him in achieving his dream of playing for Montana State. His courage and determination is an inspiration.

Cheers also to the scientists, engineers, and businessmen who have advanced the designs and practical applications of prosthetics such that an athlete who lost a limb can nevertheless shine in a rough contact sport such as football.

Reason and determination are beautiful things.

View all articles by Michael A. LaFerrara →
New Essay by John David Lewis: “There is No ‘Right’ to Healthcare”“Raisin Outlaws” Fight for Freedom to Produce and Trade
Return to Top