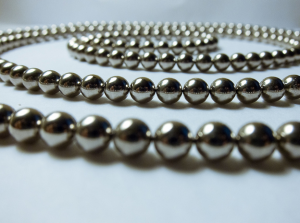 As I wrote last December, the U.S. government’s Consumer Product Safety Commission (CPSC) forced out of business Maxfield and Oberton, the producers of the adult toys Buckyballs—small powerful magnets that can be arranged in intricate designs.

Now, not satisfied with destroying Maxfield and Oberton, the CPSC is seeking to destroy the company’s former CEO, Craig Zucker—who led a spirited although ultimately unsuccessful public campaign against the CPSC’s actions.

Sohrab Ahmari provides the details in an August 30 article for the Wall Street Journal. Ahmari describes how Zucker and his partner launched the Buckyballs business, then how the CPSC intimidated numerous retailers into dropping the product and ultimately forced Zucker out of business.

[I]n February the Buckyballs saga took a chilling turn: The commission filed a motion requesting that Mr. Zucker be held personally liable for the costs of the recall, which it estimated at $57 million, if the product was ultimately determined to be defective. This was an astounding departure from the principle of limited liability at the heart of U.S. corporate law.

In his conversation with Ahmari, Zucker pointed out the idiocy of the CPSC forcing his product off the market: “Like any other product in your house, if it's used in an unintended way by an unintended consumer, it of course has the ability to create an injury.” Zucker named as examples household cleaners, knives, power tools, detergent pods, and balloons. (The CPSC itself warns that “[o]f all children’s products, balloons are the leading cause of suffocation death.”)

Zucker strongly defended his moral right to sell such products: “It's not the government's place to say what has value and what doesn't in a free society.” Zucker also warned about what will happen if the CPSC’s oppressive controls expand: “[Y]ou won't have a free market anymore—you end up with a place where adults aren't choosing which products they can own."

Americans concerned with preserving liberty and the rule of just law should praise Zucker for courageously fighting for his moral right to produce and sell the product of his choice. And we should condemn the unelected bureaucrats of the CPSC for their immoral and senseless persecution of Zucker—a persecution that can easily be expanded to any other American at any time.

Buckyballs are dead; long live the spirit that created them and that fights for producers’ rights.