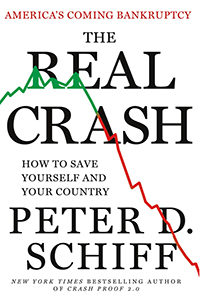 From 2006 to 2007, Peter Schiff, CEO of Euro Pacific Capital, was one of few people warning that the U.S. economy was fundamentally unsound and that real estate was grossly overpriced. In his first book, <e,>Crash Proof: How to Profit From the Coming Economic Collapse (2007), he predicted that the economy, the housing market, and the stock market would fall apart. He also voiced these predictions on several cable news shows, yet few people heeded his warnings. Some hosts and other guests even mocked and ridiculed him.

But Schiff was right.

In his recent book, The Real Crash: America’s Coming Bankruptcy—How to Save Yourself and Your Country, Schiff says that the worst is yet to come and that the 2008–2009 economic crisis was merely a “tremor before the earthquake.”

Schiff argues that the main culprit of our economic instability is America’s central bank: the Federal Reserve. Through its control of the money supply and the effect this has on interest rates, the Fed artificially inflates the prices of various asset classes, creating so-called “bubbles,” and when those prices inevitably collapse, the Fed then inflates the prices of other asset classes. “Throughout the 1990s,” Schiff observes, “we had the stock bubble and the dot-com bubble. The Fed replaced that with the housing bubble and the credit bubble. Now, the Fed and the administration are replacing those bubbles with the government bubble” (p. 20). By “government bubble,” Schiff is referring to the U.S. dollar and Treasury bonds.

When asset prices collapse and recessions ensue, Schiff notes, the Fed—via bailouts and low interest rates—props up insolvent banks and other companies (while also helping to finance government debt). It has taken these actions allegedly to minimize the short-term pain of recessions, but in doing so, the Fed has prevented the economy from correcting itself, making it increasingly unsound. “If you keep replacing one bubble with another, you eventually run out of suds. The government bubble is the final bubble” (p. 23). If the Fed keeps interest rates artificially low and if the government keeps running massive budget deficits, the day will come, Schiff argues, “when the rest of the world stops trusting America’s currency and our credit. Then we’ll get the real crash” (p. 1). . . .