Praise Stem-Cell Burgers for Benefit to People Not “Environment” 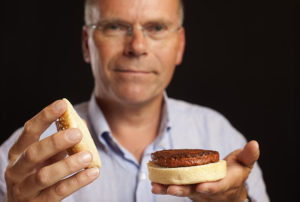 Recently Dutch scientists in London prepared the world’s first stem-cell burger, a development with great potential toward (among other things) making beef more affordable and nutritional.

Mark Post of the University of Maastricht led the team that developed the burger over a two-year period; Google’s Sergey Brin funded the project. The five-ounce burger was made of stem cells taken from the shoulder of a cow and cultivated in a nutrient solution for two months. Although further research and development will be necessary to make the meat marketable, with continued improvements lab-grown meat could soon provide high-quality nutrition for a fraction of the cost of regular beef.

Unfortunately, rather than praising the burger for its potential to benefit human beings, various commenters are praising it for its alleged benefits to the planet and to animals. For example, a New York Times article states:

Recent studies have shown that producing cultured meat in factories could greatly reduce water, land and energy use, and emissions of methane and other greenhouse gases . . . Depending on how the stem cells were obtained, no animals might need to be killed to make the meat.

Even the project’s organizers emphasized the meat’s “benefits” to non-humans. As the Times reports, Post said his goal was to “let beef eaters eat beef in an environmentally friendly and ethical way,” and Brin expressed similar aims.

It is wonderful if, by requiring fewer resources to produce, the stem-cell burgers can provide high-quality, low-cost meat. But, apart from the benefit to people, there is nothing valuable or laudable about using fewer resources or eating fewer cows.

People should proudly use the resources—including the animals—they need to pursue their lives and happiness. If people choose to eat stem-cell burgers, it should be because doing so makes economic or nutritional sense, not because they feel guilty about eating regular beef.

Congratulations to Post’s team for their technological breakthrough and its great potential for the lives of human beings.