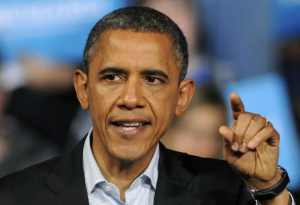 Putatively frustrated with the “fragile economic recovery,” Barack Obama recently launched a major speaking campaign “ahead of a major economic debate this fall over the federal budget and the best way to ensure sustained growth,” the Washington Post reports.

His kickoff speech at Knox College in Galesburg, Illinois, was short on specific legislative proposals but long on broad policy principles. E. J. Dionne, a prominent columnist on the left, hailed Obama’s strategy as “going big”: “Franklin D. Roosevelt accomplished this. So did Ronald Reagan. . . . The most important reason this offensive has a chance,” writes Dionne, “is that it goes to the heart of why Obama got elected in the first place and won reelection.”

Obama is promoting a big vision of egalitarian statism. “[I]nequality,” he said, is only to be “tolerated . . . for the sake of a more dynamic, more adaptable economy.”

Obama aims to employ government force to facilitate economic equality. Such force, he implies, is necessary to provide fairness: “If we believe that government can give the middle class a fair shot in this new century—and I believe that—we’ve an obligation to prove it.” Obama claimed that the government provides such a “fair shot” by forcibly confiscating wealth to subsidize manufacturing, preschool, and college; by getting government more involved in health care; by more strictly regulating wages to which an employer and employee may “agree”; and similar policies.

Obama explicitly contrasts his political program with free-market capitalism, slamming those who advocate the latter:

[I]n some cases . . . [my opponents] sincerely . . . have a fundamentally different vision for America—one that says inequality is both inevitable and just; one that says an unfettered free market without any restraints inevitably produces the best outcomes, regardless of the pain and uncertainty imposed on ordinary families; and government is the problem and we should just shrink it as small as we can.

But Obama’s egalitarian goals are immoral, and his characterization of an unfettered free market is false.

The only sort of equality with which government is properly concerned is equality before the law—that is, equal protection of individual rights to life, liberty, and property. When government consistently protects people’s rights—including their rights to keep and use the product of their effort and to trade freely with others—it establishes an unfettered free market, also known as capitalism.

Under capitalism, the government creates equality before the law by outlawing initiatory force and by using retaliatory force only against those who initiate (or threaten) to initiate it. Individuals who violate rights—by assaulting others, stealing their property, committing fraud, or the like—are restrained, so that everyone else may peaceably conduct their affairs. In a free market, people deal with others voluntarily through reason, persuasion, and trade, not force.

A consequence of capitalism—wherein people vary by ability, ambition, interests, upbringing, values, moral character, lifetime goals, and countless other variables—is that people earn different amounts of wealth. Under capitalism, inequality of wealth is both inevitable and just.

When government seeks to achieve greater equality of outcome through force—what Obama ludicrously calls offering “a fair shot”—it overturns the justice of equality before the law and violates individual rights.

The danger to American prosperity and liberty is not economic inequality or unfettered markets but a rights-violating government. In order to restore a just and thus prosperous economy, Americans must condemn Obama’s egalitarian premises as immoral and impractical, and we must advocate a fully free market with all its glorious inequality of income and wealth.