Review: The Men Who Lost America, by Andrew Jackson O’Shaughnessy 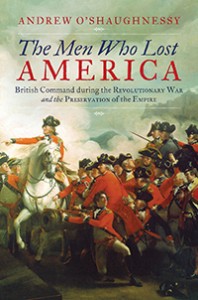 “If America should grow into a separate empire,” British Prime Minister Frederick Lord North warned in late 1778, “it must of course cause . . . a revolution in the political system of the world” (p. 15). In his latest book, The Men Who Lost America: British Leadership, the American Revolution, and the Fate of the Empire, Andrew Jackson O’Shaughnessy examines the lives of the ten British political leaders, generals, and admirals most responsible for attempting to prevent that revolution from succeeding. O’Shaughnessy sympathetically discerns how and why they failed—and why America succeeded.

O’Shaughnessy, professor of history at the University of Virginia, also examines the revolution from an outsider’s perspective in his masterful An Empire Divided: The American Revolution and the British Caribbean (2000).1 Whereas his previous work sought to answer the question of why the other British colonies in the Americas—Canada and the sugar islands in the Caribbean—did not join with the American revolutionaries, The Men Who Lost America sets forth to save the British leadership from the historical ignominy of being remembered as “incompetent and mediocre” or “hidebound” (p. 5) and “novices” (p. 8). With a much more intimate biographical knowledge of these principal actors—including George III; generals Cornwallis and Clinton; Lord North; and the secretary of state for America, Lord George Germain—O’Shaughnessy seeks to reconstruct the perspective of the British war effort, which is, he contends, “essential for making the war intelligible” (p. 9).

Among the strengths of the book, O’Shaughnessy artfully weaves the entire breadth and sweep of the wars of the American Revolution through nine biographical chapters (with one chapter devoted to the brothers General Sir William Howe and Admiral Lord Richard Howe). O’Shaughnessy also destroys certain deeply entrenched myths about the American Revolution and inculcates greater appreciation for the victory gained by the revolutionaries over a collection of determined, intelligent—and in many cases quite sympathetic—adversaries. . . .