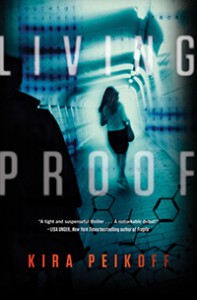 In her debut novel, Living Proof, Kira Peikoff addresses one of the hottest issues today—religious dogma versus individual rights—in the form of a conflict between the “rights” of embryos and the rights of people to engage in embryonic stem cell research.

Living Proof is set in the not-too-distant future, the year 2027, in which the government has placed bans on any type of research on embryos and embryonic stem cells as part of an embryonic rights movement. The legal manifestation of this movement is the Department of Embryo Preservation, or DEP, whose sole purpose is to ensure that no embryos are used for research or destroyed in any way. The devoutly religious director of the DEP, Gideon Dopp, prides himself on his position at “the noblest of all government agencies” (p. 332), where he is responsible for “weeding out sinners to protect innocents” (p. 331). He makes it his personal goal to ensure that no embryos are harmed.

[The DEP] mandated that all fertility clinics “preserve the soul of every embryo.” In keeping with the law, the department required that clinics report, once a month, the number of embryos left over from every patient’s attempt at in vitro fertilization—a number the inspectors verified with their visits. To ensure accurate reporting, the department periodically conducted random audits. . . . (p. 14)

If an unfortunate doctor fails an audit, there are “serious consequences for the clinic: probation and heavy fines” (p. 15). The authorities mete out far more severe punishments for the “crime” of destroying an embryo, an act that is grounds for shutting down the clinic and charging the doctor responsible with first-degree murder.

In this setting, the reader follows Arianna Drake and Trent Rowe in a conflict-ridden love story.

Arianna, a medical doctor, owns a fertility clinic and is subjected to these random audits. It is no secret that she and the other doctors at the clinic despise these invasions, which—due to high embryo counts each month—become more frequent and intrusive.

Although all the fertility doctors are uneasy about the existence and stifling presence of the DEP, to Arianna it is an “interruption that threatened to undermine her life’s biggest project” (p. 18). (What that project is, readers will have to discover for themselves.) Arianna ultimately finds herself in a life-or-death struggle against the DEP and what it represents.

Trent Rowe was raised Christian and is a faithful yet unfulfilled agent at the DEP. Through a special assignment, he creates a new life for himself and works undercover to befriend and gain information from Arianna. After hours of conversation and bike rides, he finds himself falling for Arianna.

Trent finds himself struggling between life as a faithful DEP agent and life with Arianna, a conflict that brings into question all his religious beliefs and the legitimacy of the DEP. As his relationship with Arianna deepens, Trent finds it harder but ever more imperative to keep his true identity from her. His two lives increasingly clash, and, ultimately, he must choose which Trent he wants to be.

Throughout, the novel praises man’s ability and life-serving achievements, most notably in the field of science. Consider a personal reflection of one of the characters, a scientist named Sam, while pursuing his work:

Watching the tiniest of magic shows with his microscope, he saw the moment that each cell split into two. It was such a basic, simple action—the crux of all life—and yet, he thought of how astronauts must feel watching Earth from space. As a teenager, Sam had wondered about such a surreal experience, but now he grasped how they felt watching that blue orb glowing against the blackness of the universe. He understood that his own experience happened at the same fundamental juncture as theirs: whether minuscule or vast, it was where man, through the force of his mind, was able to view the horizon of nature’s power—the most spectacular beauty imaginable. (p. 279)

Sam’s work illustrates man’s capacity to achieve greatness. He works relentlessly, despite numerous setbacks, and does not stop until he achieves what he is after. Peikoff describes the results of his months of research:

The landscape of the petri dish transcended that of a cell-culture. It was a field of flawless diamonds, sparkling and scintillating under a master jeweler’s knife. It was the bottom of the hourglass, where the golden droplets of time had accumulated, pure and precious and waiting to be found. (p. 264)

Given its plot, the novel continually references the science of embryonic stem cell research, a field that is widely misunderstood by or simply unknown to many. But Peikoff clarifies the science sufficiently for readers to follow the story, masterfully integrating the explanations into the plot. For example, Trent recalls what he learned during DEP training and thereby provides relevant scientific explanations. At another point, the reader learns relevant scientific concepts along with Trent as Arianna explains them to him.

Although the story is a little predictable in that it follows a common “boy meets girl, boy loses girl, boy gets girl back” story line, it remains suspenseful. Even while rereading the novel, I found myself on the edge of my seat, hardly able to stand the suspense and anticipation.

Living Proof is a thrilling mystery-romance about how a society opposed to reason and reality goes awry. Peikoff engages her readers in situations and dialogues concerning religion and science, challenging them to think critically and question their preconceptions. Living Proof is a “must-read” for anyone interested in such matters.

Having thoroughly enjoyed Living Proof, I was thrilled to learn that Peikoff is hard at work on her second book, about which details are not currently available. Whatever the details, though, we need not wonder whether Peikoff can write a gripping story merging timeless truths with contemporary debates. She has provided living proof.

View all articles by Mikayla Callen →
Letter to the Editor
Review: The Men Who Lost America, by Andrew Jackson O’ShaughnessyReview: The Chronicles of Prydain, by Lloyd Alexander
Return to Top