“I was arrested in Eno’s diner. At twelve o’clock. I was eating eggs and drinking coffee. A late breakfast, not lunch. I was wet and tired after a long walk in heavy rain” (p. 1). 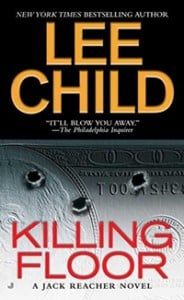 This is the scene in which Lee Child introduces the world to Jack Reacher, an American wanderer and former homicide investigator with the military police who manages to get himself into all kinds of trouble, despite his efforts to avoid it.

Even with only these opening lines of Killing Floor—Child’s first novel, originally published in 1997—we get a sense of Reacher’s character. He is a man who likes to get to the point. He narrates in concise statements. He is rarely ruffled, never intimidated.

Reacher, tired of his regimented military life—he was born on a military base in 1960 and never left the military until six months before the novel begins—decides to try the freedom of the open road. He wants to go where he pleases, see the country, and not get tied down. His only stable contact is his bank, which wires him cash from his military pension and sends him mail.

On a whim, Reacher wanders into Margrave, Georgia, to learn the story of a long-deceased musician called Blind Blake, whom his brother had mentioned to him in a letter. His plan is to look around, get the lowdown on Blind Blake, then hop on a bus and leave. . . .

View all articles by Ari Armstrong →
Letter to the Editor
Review: The Chronicles of Prydain, by Lloyd AlexanderReview: The Real Crash, by Peter D. Schiff
Return to Top