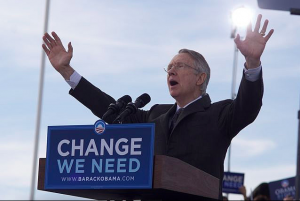 During the push to pass ObamaCare in 2010, leftists ridiculed anyone who likened the legislation to socialized medicine. But socialized medicine—medicine provided by and controlled by the government—was and is the logical end of ObamaCare. And last week, Harry Reid—who as the senate majority leader was instrumental in passing ObamaCare—confessed as much.

While on a Nevada PBS television show, Reid said that ObamaCare is a “step in the right direction” toward more government control of health care, Karoun Demirjian reports for the Las Vegas Sun. Although, judging by the news report, Reid did not fully articulate his ideal health care policy, he praised the so-called “single-payer system”—in which the government is the single payer for health services—and said that eventually private health insurance “absolutely” should be abolished.

Reid is correct that the ultimate goal toward which ObamaCare is merely a step is fully socialized medicine. ObamaCare forces people to purchase government-approved and government-regulated health insurance. By subsidizing insurance and regulating rates, it forces some people to pay for the health care of others. ObamaCare also establishes a bureaucracy to determine which services doctors may and may not offer their patients under such “insurance.”

Will health care in America become fully socialized? It depends on whether Americans decide to support politicians who aim to make it so.

In any event, we can’t say Harry Reid didn’t warn us.