George Will: A Conservative “None” in Need of Ayn Rand’s Theory of Rights 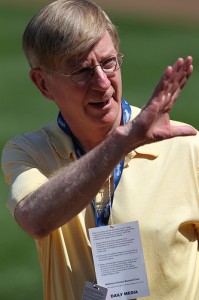 In his recent National Affairs essay, “Religion and the American Public,” George Will writes: “I approach the question of religion and American life from the vantage point of an expanding minority,” namely, Americans with no religious affiliation, “a cohort that the Pew public-opinion surveys call the ‘nones.’”

Will’s essay is long and rich, and much could be said about it, but we want to focus on the significance of Will’s lack of religious affiliation, and on a deficiency in his thinking about rights.

Will, a major conservative thinker, has, in this essay, to some extent broken ties with religious conservatism. Granted, denying affiliation with a religion is not the same as rejecting religion, but it is deeply significant—especially for a prominent and highly celebrated conservative journalist.

Will discusses the American founders’ thoughts on religion, noting that some, such as Benjamin Franklin, were Deists who relegated the “creator” to the status of “a rich aunt in Australia: benevolent, distant, and infrequently heard from.” George Washington, notes Will, refused to kneel for prayer; the “longer John Adams lived, the shorter grew his creed”; and Thomas Jefferson endorsed a “wall of separation” between church and state.

Will then moves to the main concern of his essay: the relationship of religion to the American way—that is, to government based on rights. Here, Will appears further at odds with conservative tradition. “I do not think the idea of natural rights requires a religious foundation,” he writes. “The American founding owed much more to John Locke than to Jesus.” He even says explicitly that neither successful self-government nor “a government with clear limits defined by the natural rights of the governed” requires religion. For these, writes Will, “religion is helpful and important but not quite essential.” . . .

View all articles by Stephen Bourque →