Review: The Chronicles of Prydain, by Lloyd Alexander 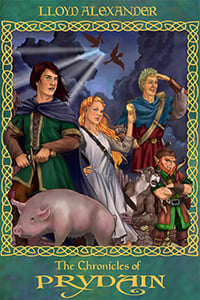 In his introductory remarks to The Chronicles of Prydain, Lloyd Alexander notes that the story is fantasy, yet not far removed from reality. Although the series includes enchanters, invisible dwarfs, and other impossibilities, the protagonists must strive constantly to live up to their highest potential in order to achieve their goals; and they must judge other people, who may not be completely good or evil and who may be much better or worse than they initially appear. So, too, notes Alexander, must we all. This is the way the real world is.

The Chronicles of Prydain is ideal for young readers from about fourth through sixth grades, or for parents to read aloud to third or fourth graders. The series consists of five books: The Book of Three, The Black Cauldron, The Castle of Llyr, Taran Wanderer, and The High King.

The Book of Three introduces the main character of the series: Taran, a young boy nicknamed “assistant pig keeper” for his role on the farm where he lives and works. At the start, he is worried that he will never become anyone special, but after setting out to retrieve the escaped pig he is in charge of, and over the course of many adventurous trials that ensue, Taran develops into a heroic young man. He learns how to make tough choices, to weigh his alternatives by means of his best judgment, to judge individuals’ characters, to acknowledge his errors, and to persist in the pursuit of his goals even in the face of grave danger. In short, he learns how to fight for the people he loves and the world he wants.

In proving himself far more capable than he initially appears, Taran is much like Eilonwy, Gurgi, Doli, and Fflewddur Flam, the other four main characters and his close friends throughout the series. . . .