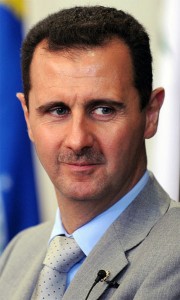 Secretary of State John Kerry is right that Syrian president Bashar al-Assad’s use of nerve gas against the Syrian population is a “moral obscenity”—but he is wrong that this moral obscenity justifies U.S. military intervention.

As Reuters reports, the evidence indicates Assad used “rockets or missiles . . . to disperse a nerve agent in the worst chemical attack in a quarter of a century.” As one British military analyst told Reuters, “the idea is to drop these things on a population, kill lots of people very quickly, and then your own forces can go in [after the gas has dispersed] without suffering consequences.”

In response, Kerry “strongly implied that the United States is ready to embark on direct military action” against Assad, the Los Angeles Times reports.

But Assad’s assault on Syrians does not justify military action by the United States, whether direct or indirect. Syria is embroiled in a civil war, with Assad’s brutal totalitarian regime pitted against rebels, many of whom may have equally totalitarian aims. A Reuters report refers to “al-Qaeda’s growing role” among the rebel forces and to “the growth of radical Islamists in rebel-held areas.” Employing military action against Assad’s regime certainly will not bolster the security of America or of Americans.

That the Assad regime terrorizes and kills Syrians, including, no doubt, many innocent people (e.g., children), is indeed a moral obscenity. But ending this moral obscenity is not the moral responsibility of the U.S. military.

The Syrian conflict is a civil war—the outcome of which has no discernable bearing on U.S. security. For the U.S. government to sacrifice the safety of American soldiers and the wealth of the American people by engaging in this conflict would stack obscenity upon obscenity. This is not America’s war.