Antitrust Assault on Halliburton, Baker Hughes, and Schlumberger is Obscene 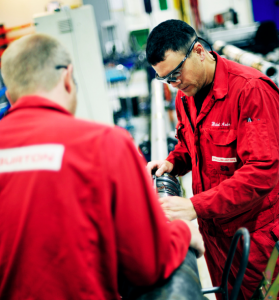 A federal antitrust class action lawsuit has been filed against the companies that supply the pressure pumping equipment, fluids, and personnel essential to the hydraulic fracturing (fracking) revolution underway in the United States.

The lawsuit alleges that the three largest suppliers, Halliburton, Baker Hughes, and Schlumberger, have “colluded to restrict and manipulate supply in order to increase prices and market share.”

Oil industry experts are baffled by the investigation because it has come during a time of increased competition and declining prices, and because the combined market share of these three companies has decreased from 85 percent a decade ago to 63 percent in 2012 to an estimated 43 percent today.

Industry consultant Alex Robart remarked: “With 54 frack players in the U.S. market, probably half of which are new entrants in the last five years, the idea of a non-competitive market is absurd.” And industry consultant Richard Spears stated:

It’s a big industry, it has lots of competition, and right now the price of a frack job is as cheap as its been in the last three years. . . . I can’t speculate what they’d be looking for or what they would find.

But a brief glance at the purpose and history of antitrust laws will explain the apparent puzzle.

Antitrust laws are tools for harassing and punishing successful businesses, and they have been used against producers in the oil industry since the Sherman Act was used to break up Standard Oil in 1911. As Alex Epstein points out in “Vindicating Capitalism: The Real History of the Standard Oil Company,” antitrust law

explicitly denies businesses the freedom to associate with other businesses and with customers on terms of their choosing; it means that any voluntary arrangement deemed by the government to be in “restraint of trade” can be stopped and punished.

In this latest case involving Halliburton, Baker Hughes, and Schlumberger, the claimant—Cherry Canyon Resources—entered into a voluntary contract for hydraulic fracturing services. Now, after services have been rendered and fees paid, Cherry Canyon seeks treble damages for alleged collusion under “Section 1 of the Sherman Antitrust Act of 1890 . . . which prohibits conspiracies or combinations in restraint of trade or commerce.”

What exactly are “collusion” and “restraint of trade”? You will search in vain for clear definitions.

Antitrust laws are utterly vague and intentionally so. The laws are written such that they enable government to attack any business at any time. As Ayn Rand succinctly put it:

The purpose of antitrust law is to enable government to cut down any business (or group of businesses) that—by means of voluntary, non-coercive production and trade—stands tall and thereby makes envious competitors feel small. These laws violate the rights of some businessmen to act on their own judgment so that other businessmen can appear to “achieve” greater success than they actually achieve.

Americans should be outraged at this latest assault on the good for being good. Halliburton, Baker Hughes, and Schlumberger supply materials and personnel that are essential to production of the energy on which our lives depend—and they do so solely by means of voluntary, contractual exchange. They deserve not punishment but praise.

Shame on Cherry Canyon Resources et al. for filing this vile suit—shame on the U.S. government for perpetuating rather than repealing the antitrust laws—and condolences to the great producers who are being assaulted because they are great.

View all articles by David Biederman →
If You Berate Parents for Sending Their Kids to Private School, You Are a Bad PersonAmerica’s Cup Showcases Mental and Physical Excellence
Return to Top