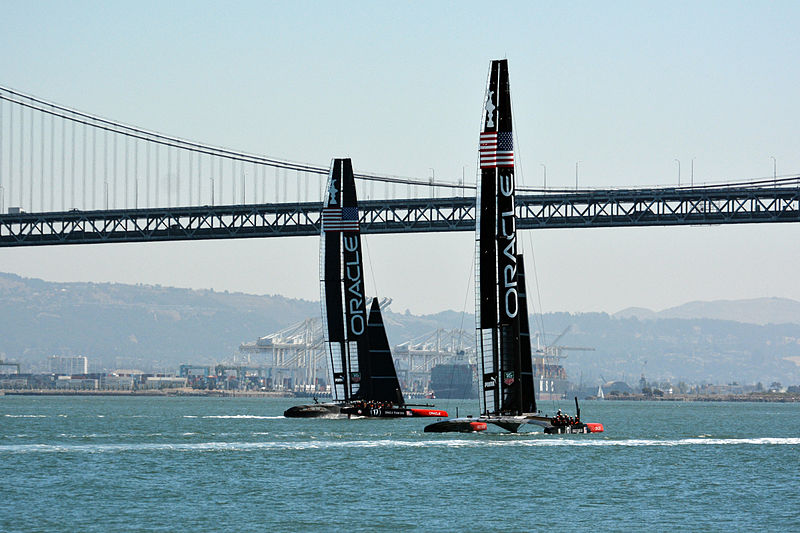 While many Americans turn their attention to the start of the NFL football season, others anticipate a lesser-known but intensely exciting competition gearing up in the San Francisco bay: the 34th America's Cup.

In this great sailboat race, competitors showcase their engineering prowess, mental and physical training, and skill at piloting some of the fastest sailboats on the water.

This year, the competitors will race on a new class of boat, the AC72. Each competitor designs its own boat within rules of the class. By employing a thirteen-story sail, a catamaran configuration, and—most significantly—foils that lift most of the seven tons of the boat out of the water, these boats can exceed 50 miles per hour on wind power alone. Both teams have spent tens of millions of dollars designing and building their boats and training to operate them.

According to Russell Coutts, CEO of Oracle Team USA, the new format for the race is “meant to test the best sailors in the world” in an “extreme” and “active” environment.

Sailing at this level requires top mental and physical performance as well as top-notch design. The engineers and designers compete to create the fastest boat they can within the confines of the rules. The tacticians watch the course for any advantage in faster wind or tide. The sailors keep themselves in top physical condition so they can perform the rigorous tasks involved in maneuvering these remarkable vessels.

The America’s Cup combines the kind of high-tech mechanics involved in auto racing, the kind of physical demands inherent in more-traditional sports, and the kind of strategic elements involved in chess. It is a competition that showcases the very best of man.

Let the sails rise, let the wind blow, and may the best team win!