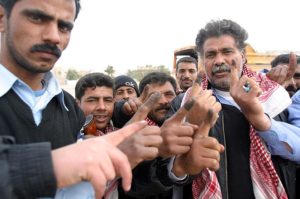 With the very best intentions, we got it wrong. By elevating the establishment of democracy above all other priorities in states beyond Europe, we got elections—then had to watch freedom suffer.

Peters argues that the United States’s support for “democracy” has led not to freedom but to the suppression of individual rights by democratically elected governments in country after country in the Middle East, Russia, and elsewhere. “Mesmerized by elections,” Peters writes, “we forgot freedom.”

Although Peters laudably criticizes the “democracy at all costs” mentality, he unfortunately does not offer a clear alternative. He correctly notes that the United States was established on ”the rule of law and impartial judicial institutions” tasked with protecting individual rights. However, he calls this system a democracy rather than what it truly is: a constitutional republic.

Americans need to understand what democracy is—and unequivocally repudiate it.

“Freedom,” as Yaron Brook and Elan Journo explain in their article, “The ‘Forward Strategy for Failure,” “is fundamentally incompatible with democracy.” Though democracies and constitutional, rights-respecting republics both entail elections, that similarity is superficial.

The choice is stark: democracy or freedom—collectivism or individualism. If we are to advance the cause of freedom, both at home and abroad, we must recognize that democracy is the antithesis of freedom because it is the nemesis of rights.