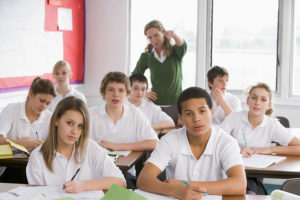 California's state health-care exchange, Covered California, will channel one million dollars into a Los Angeles school district program to train students to be messengers for ObamaCare, the Heartland Institute reports.

The purpose of the program is to encourage students to promote ObamaCare to their parents and relatives. School staff will also take part in the program by assisting in presentations on ObamaCare and making phone calls to parents encouraging them to enroll in ObamaCare-approved insurance. Further, a spokeswoman for the L.A. school district declared that the program is designed as a pilot program that could serve as a model for similar efforts in the future.

Pushing propaganda about ObamaCare clearly has nothing to do with education. But the fact that government schools are “teaching” things that they ought not be is not too surprising. As C. Bradley Thompson argues in his recent Objective Standard article, the primary goal of government schools has never been to educate students in what they need to know to become independent and successful adults. The goal of government schooling, Thompson shows, is to “indoctrinate children and mold them to the goals of the state.”

This disturbing program aimed at training public educators and students to double as government propagandists for ObamaCare illustrates and reinforces Thompson’s thesis. As the Obama administration becomes more brash and unabashed in using children as messengers for and cheerleaders of the state, those who care about children receiving a real education—as well as those care about rights-respecting government—should consider Thompson’s conclusion: a proper education requires the separation of school and state.