Jonathan Hoenig and The Objective Standard—Lawbreakers No More 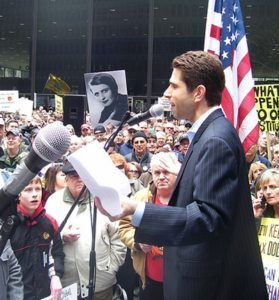 The Objective Standard aided and abetted lawbreaker Jonathan Hoenig for more than a year—but we are now in the clear.

Hoenig, a.k.a. “Capitalist Pig,” has purchased a back-cover advertisement with The Standard since the summer of 2012 to promote his hedge fund business. But, as Peter Sterne reports for the New York Observer, from 1933 until July 10 of this year, hedge funds were “prohibited from advertising to the general public.” Sterne explains:

The Securities and Exchange Commission voted . . . to let hedge funds advertise to the general public, and hedge funders are cheering—none more so than Jonathan Hoenig.

“For 80 years, pornographers, cigarette companies and firearms manufacturers could advertise, but not hedge funds,” he told The Observer in an email. . . .

Last year, his Capitalistpig Hedge Fund became the first fund ever to run an advertisement, with a full-page ad in Crain’s Chicago Business. The fund also placed ads in The Objective Standard, a quarterly journal of Objectivist philosophy. Of course, these ads were technically illegal, but the SEC ignored Mr. Hoenig’s civil disobedience.

Congratulations to Hoenig for this vital victory. And godspeed to him as he fights other regulations of his business—so that he can make massively more money for his clients and himself.