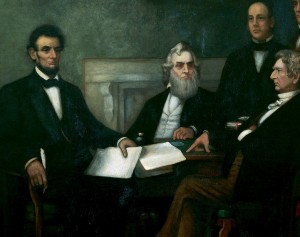 Here we go again. Current and former government officials in the country founded on the principle of individual rights—the country that fought a horrific bloody war to end slavery—are calling for re-institutionalizing involuntary servitude in the form of “universal national service.” Sigh.

The latest figurehead to advocate this abomination is the former commander of U.S. and international forces in Afghanistan, General Stanley McChrystal. “Universal national service,” he says, “should become a new American rite of passage.”

McChrystal stops short of overtly advocating legally mandated national service. Instead, he advocates back-door physical coercion to implement it. He introduces a “proposal that would create one million full-time civilian national-service positions for Americans ages 18–28.” The program would be modeled after AmeriCorps, a coercively tax-funded federal organization. He then suggests that

corporations and universities, among other institutions, . . . be enlisted to make national service socially obligatory. Schools can adjust their acceptance policies and employers their hiring practices to benefit those who have served—and effectively penalize those who do not.

McChrystal doesn’t say how he would “enlist” these institutions, but it’s clear that, given the massively intrusive role that government has accrued in education and business via taxpayer funding, regulations, and the like, the state has the means to coerce “enlistment.” Given the structure of McChrystal’s proposed program and the nature of U.S. government today, if his program were implemented, national service would effectively be mandatory.

To support his call for national service, McChrystal summons Abraham Lincoln’s Gettysburg Address, saying “the president exhorted a crowd of civilians on their duty to carry forward the nation's work.” But Lincoln never spoke of or implied any such collectivist premise in his address. Instead, his brief speech recalled the promise of the Declaration of Independence, which “brought forth, upon this continent, a new nation, conceived in liberty,” and urged us to honor the Civil War dead by resolving “that this nation shall have a new birth of freedom.” (Although around 2 percent of Union soldiers were drafted, this practice patently contradicted the primary purpose of the war, which was to end involuntary servitude in the United States, and this fact has no bearing as an argument for involuntary servitude.)

McChrystal’s call for national service obviously contradicts America’s founding principles. That McChrystal invokes the name of the president who worked to abolish slavery in America—in order to call for a new form of slavery—is shameful.

It’s time to bury the un-American idea of universal national service and the corrupt moral code behind it.

View all articles by Michael A. LaFerrara →
America Doesn’t Need a “Nudge Squad”; It Needs a Rights SquadObama’s “Big” Statist Vision for America
Return to Top