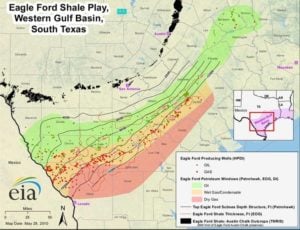 In April, I highlighted the enormous wealth being generated in the Texas Eagle Ford shale. Now that April’s oil production numbers have been made public, there is even more to celebrate. Oil production was 54 percent higher than it was the previous year.

This enormous increase in productivity was achieved by drillers and hydraulic fracturers (frackers) who increased the region’s total number of oil wells from 40 in 2008 to 1,262 in 2012.

The commissioner of the state's oil and gas regulatory agency stated, “The Eagle Ford Shale has the potential to be the single most significant economic development in our state’s history”—a claim backed up by substantial evidence.

Enrolment in petroleum training courses at a regional college increased from 46 students in 2008 to 1,086 in 2012; still, a local Petroleum Engineering firm stated that it is “next to impossible” to find enough employees.

The shale development in this region is a beacon of progress in a country where the economic environment is often stagnant if not in decline. Life-loving Americans should celebrate and support this energy revolution.