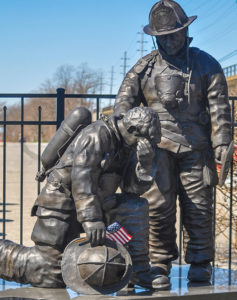 In his Salon article “Ayn Rand Could Have Learned from the Arizona Firefighters,” Robert Reich presumes that the nineteen firefighters who lost their lives June 30 while battling a wildfire in Arizona chose their dangerous profession based on “something other than rational self-interest”:

Like the first-responders to 9/11 and other emergencies, and members of the armed forces, they put themselves in harm’s way (or chose a job that did so) because they wanted to serve.

Reich asserts that what motivates such service is “want[ing] to be part of something larger than themselves.” And he claims that Rand’s philosophy of selfishness amounts to the idea that “the aggregation of great wealth and maximization of profit is the only justifiable motive.”

Clearly, Reich has not read Rand. Or, if he has, he’s pretending that she said something other than what he knows she said.

It is true that Rand rejected the notion that people should strive to be “part of something larger than themselves.” She held that the individual is an end in himself and that his own happiness is the proper, moral purpose of his life. But she did not hold that money is the only justifiable motive, which is why Reich did not and could not point to where she ever said such a thing.

Although Rand certainly saw financial profit as a noble motive, her morality of rational selfishness provides a far richer account of values and motivations—and this is unmistakably evident in every one of Rand’s books and essays in which she addresses this subject. . . .

View all articles by Joseph Kellard →
Letter to the Editor
Pat Robertson: “The Bible Didn’t Talk About Civil Rights”Jonathan Hoenig and The Objective Standard—Lawbreakers No More
Return to Top