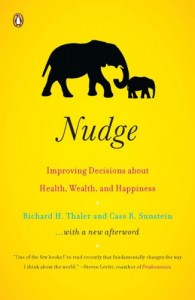 The federal government is hiring a so-called “nudge squad” to “scientifically” manipulate the behavior of American citizens. What could possibly go wrong?

Fox News has the story: “The federal government is hiring what it calls a ‘Behavioral Insights Team’ that will look for ways to subtly influence people's behavior” along lines suggested by the book Nudge by Richard H. Thaler and Cass R. Sunstein. A professor who received the government’s offer to join this team called it the “nudge squad,” Fox reports.

But the government’s proper role is not to “nudge” us into behaving in ways of which politicians and bureaucrats approve; it is to recognize and protect our rights, including our rights to produce wealth in accordance with our own judgment and to keep and spend our wealth as we deem best. When the government employs the coercion of taxes or regulations to “nudge” us to act one way or another, it violates our rights.

Consider some of the ways:

The Fox story and the government advertisement discuss numerous other examples of existing and potential programs to “nudge” Americans’ behavior, and no doubt the “nudge squad,” once entrenched as a formal bureaucracy, will think of unlimited more applications. Indeed, the government advertisement encourages new “nudge squad” employees to come up with “new ideas” for how to implement “behavioral insights” through federal policy.

Undoubtedly a scientific approach to management can be useful in private business as well as in government. But, insofar as the government violates rights—as the “nudge squad” obviously aims to do—it violates the only proper purpose of government.

America does not need a “nudge squad”; it needs a rights squad—a squad of citizens who demand loudly and consistently, by word and by vote, that the government stop violating and start exclusively protecting individual rights.