The Boston Tea Party Opera: An Ode to the Spirit of American Independence 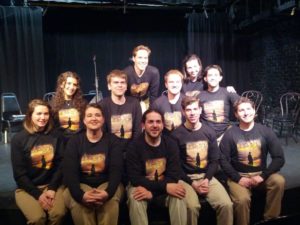 Imagine a romantic opera that features such revolutionary era characters as Paul Revere, Sam Adams, and James Otis. You might understandably assume that such a work had been written a long time ago, when romanticism and the American Revolution were more highly regarded by the culture. This opera, however, was completed just this year.

I was able to attend two fundraising events for M. Zachary Johnson’s The Boston Tea Party Opera, which has been written but not yet produced. The fundraisers involved musical performances, which gave me a good indication of what is to come when the opera is produced. My assessment is highly positive.

Combining historical figures and their writings with his own original lyrics and music, Johnson has created a work of art that is entertaining, inspirational, and timely.

The opera dramatizes a story in which tensions are running high as a war is about to be waged over the moral and political question: Does an individual have an inalienable right to his life or is he a subject of the state?

The music provides moods ranging from light and comical to rich and celebratory. From the opening notes, the audience feels as though they are transported to an Enlightenment period of abundant confidence best described by Thomas Paine’s maxim, “We have it in our power to begin the world over again.”

The songs dramatize themes of independence and the importance of individual rights, and they are just as relevant today as they were 240 years ago.

In the song "My Own Cloth," Elizabeth Adams (Sam’s wife) emphasizes the decision of colonial women to produce many of their own goods instead of being dependent on the tax-imposing British.

I will weave my own cloth, thank you very much.
All the wives of Freedom, let us take up thread.
All that fancy ribbon, all that lace and such?
Pretty English garments? Not a single shred!

Linens from Great Britain would be such a crutch—
Vicious usurpations, they would only spread.
Lovely hats from London? Those I will not touch.
No more Redcoat imports—make our own instead.

A tour-de-force in the opera, "Against Writs of Assistance" represents a five-hour speech given by lawyer and political activist James Otis, in which Otis condemns the practice of British soldiers entering colonists’ homes without good reason, probable cause, or advance notice. This speech would eventually inspire the Fourth Amendment. (Today we see that Amendment under attack, with government agencies collecting volumes of phone and email records of citizens.) The ten-minute song presents an argument in five parts, addressing who, what, where, when, and why? Consider the part titled "Where?".

A person with this writ may enter shop and home at will,
Command all to assist him—all his orders to fulfill.
His servants may break locks or bars—yes, all that's in their way;
And yet his motives need not deign to see the light of day.

Essential liberty demands the freedom of one's house
Where man provides security to him, his child, his spouse.
In his castle like a Prince is man while safely calm at home;
Yet some strangers' given license throughout all his space to roam!

These and additional songs can be heard at the opera’s website.

Kudos to M. Zachary Johnson for writing The Boston Tea Party Opera—and best success to him in producing it.