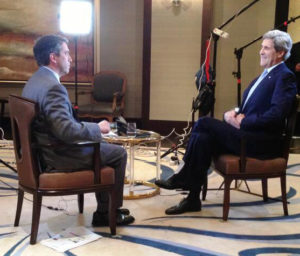 We are outraged to learn that James Rosen was named a criminal co-conspirator for simply doing his job. It fact, it is downright chilling. We will unequivocally defend his right to operate as a member of what up until now has always been a free press.

And Roger Ailes, president of Fox News, wrote to his employees:

We reject the government's efforts to criminalize the pursuit of investigative journalism and falsely characterize a Fox News reporter to a Federal judge as a "co-conspirator" in a crime. . . .

The administration’s attempt to intimidate Fox News and its employees will not succeed and their excuses will stand neither the test of law, the test of decency, nor the test of time. We will not allow a climate of press intimidation, unseen since the McCarthy era, to frighten any of us away from the truth. . . .

I am proud of your tireless effort to report the news over the last 17 years. I stand with you, I support you and I thank you for your reporting with courageous optimism. Too many Americans fought and died to protect our unique American right of press freedom. . . . As Fox News employees, we sometimes are forced to stand alone, but even then when we know we are reporting what is true and what is right, we stand proud and fearless. Thank you for your hard work and all your efforts.

Kudos to Fox News for defending the free press. May Clemente and Ailes inspire other journalists to stand strong for the First Amendment.