Dwyane Wade and Miami Heat Put the “I” in Win 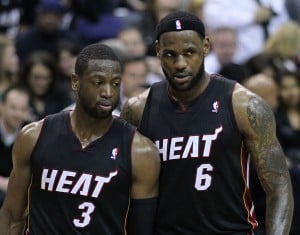 Did the Miami Heat win the NBA Finals championship against the San Antonio Spurs June 20 because the Heat’s players acted unselfishly, on the premise that “there’s no ‘I’ in ‘team’”?

That’s the view Magic Johnson—the former pro turned ABC sports analyst—expressed when talking with the Heat’s Dwyane Wade after the game. Johnson said that in 2010, when the Heat’s management recruited superstar LeBron James, Wade was the only star who would have taken a backseat to him.

“You’re the greatest unselfish superstar that has ever played in this game,” Johnson told Wade.

But Johnson’s comment, although a common view in sports, doesn’t make sense.

Wade and James agreed to play together because each wanted to win basketball games—and to enjoy all the fruits that come with that, such as enormous salaries and superstar status. Each man helped his team win for his own selfish interests.

Wade, who won his first NBA championship with the Heat in 2006, said that welcoming James to his team was “one of the hardest things I had to do.” But after he’d watched Los Angeles Lakers superstar Kobe Bryant win his fifth NBA title in 2010, he thought: . . .