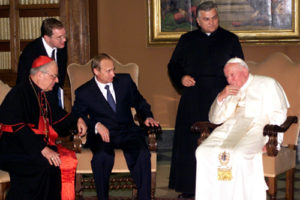 The Catholic Church claims the late John Paul II enacted a miracle. As if that were not remarkable enough, the pope is alleged to have enacted his miracle posthumously!

Nick Squires reports for the Telegraph:

The Vatican has secretly attributed a mystery miracle to the late John Paul II, clearing the way for him to be declared a saint.

The Holy See has yet to reveal what the miracle was or where and when it took place but Vatican sources said it would "amaze the world."

It concerns the “extraordinary healing” of a Costa Rican woman who was cured of a severe brain injury after her family began praying to the memory of the late Polish pope, according to reports in the Italian media.

To be clear, a miracle is not an unusual natural occurrence for which a rational explanation is possible, such as a snake being born with two heads. Rather, a miracle is an occurrence that violates natural law—an occurrence in which things act in contradiction to their nature—such as a wooden stick turning into a snake, or a bush speaking, or a prayer healing.

If we take the claim about the Costa Rican woman at face value—that she had a severe brain injury that healed following her family’s prayer—that hardly constitutes a miracle. It’s a classic logical fallacy to say “after this, therefore, because of this.” (For a funny skit dealing with this fallacy, see the video below.) . . .

View all articles by Ari Armstrong →
Letter to the Editor
We Already Have a “Media Shield”: The First AmendmentFreedom and Fracking Fuel Investment in Texas
Return to Top