Review: The Year of Living Biblically, by A. J. Jacobs 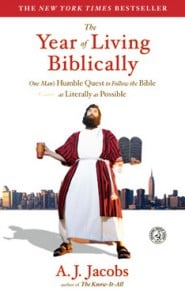 One way to determine the practical significance of ideas is to try practicing them. In The Year of Living Biblically: One Man’s Humble Quest to Follow the Bible as Literally as Possible, A. J. Jacobs sets out to do just that. What does “taking the Bible literally” mean? Jacobs explains:

To follow the Bible literally—at face value, at its word, according to its plain meaning—isn’t just a daunting proposition. It’s a dangerous one.

Consider: In the third century, the scholar Origen is said to have interpreted literally Matthew 19:12—“There are eunuchs who have made themselves eunuchs for the sake of the kingdom of heaven”—and castrated himself. Origen later became a preeminent theologian of his age—and an advocate of figurative interpretation.

Another example: In the mid-1800s, when anesthesia was first introduced for women in labor, there was an uproar. Many felt it violated God’s pronouncement in Genesis 3:16: “I will greatly multiply your pain in childbearing; in pain you shall bring forth children.” If Julie and I ever have another child, would I dare get between her and an epidural needle? Not a chance.

It’s a good bet that, at some time or other in history, every single passage in the Bible has been taken as literal. I’ve decided I can’t do that. That’d be misleading, unnecessary flip, and would result in missing body parts. No, instead my plan is this: I will try to find the original intent of the biblical rule or teaching and follow that to the letter. If the passage is unquestionably figurative—and I’m going to say the eunuch one is—then I won’t obey it literally. But if there’s any doubt whatsoever—and most often there is—I will err on the side of being literal. When it says don’t tell lies, I’ll try not to tell lies. When it says to stone blasphemers, I’ll pick up rocks. (p. 9)

At the start of Living Biblically, Jacobs describes himself as officially Jewish, but “Jewish in the same way the Olive Garden is an Italian restaurant. Which is to say: not very” (p. 3). Later he describes himself more accurately as agnostic, which is significant with respect to the progression of his quest. As he tells it: . . .

View all articles by Daniel Wahl →
Letter to the Editor
Review: Island, by Thomas PerryReview: After the Welfare State
Return to Top