Review: The Truth about Gun Control, by David B. Kopel 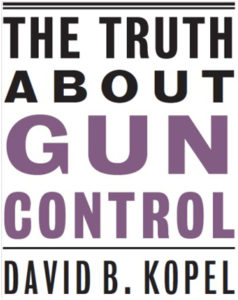 Should government further restrict the ability of rights-respecting Americans to buy, own, and carry guns, or should it recognize that ability as a basic right and protect it? David B. Kopel, among the most influential Second Amendment scholars working today, makes a terse but cogent argument for the right to keep and bear arms in his latest book, The Truth about Gun Control.

Part of the Broadside series by Encounter Books, Kopel’s book is very short, only 44 small pages. A publisher’s note in the book explains that the series seeks to unite “an 18th-century sense of political urgency (think The Federalist Papers, Common Sense) with 21st-century technology and channels of distribution.” Although none of the works in the series is destined to be nearly as influential as those founding-era works, Kopel’s book ably meets its objective.

Kopel focuses on the history of gun ownership and gun control in America, and he makes his arguments about gun rights within that historical context. In the first paragraph of the book, he sets some key context:

Today’s war on Second Amendment rights . . . continues an American cultural war that has been going on for half a century. The roots of the gun-control movement can be traced back even further, to Reconstruction and attempts to disarm the freedmen, and before that to the British gun-confiscation program that sparked the American Revolution. (p. 1)

And he soon indicates the essence of the original case for the right to bear arms—the case made by Enlightenment thinkers . . .

View all articles by Ari Armstrong →
Letter to the Editor
Review: After the Welfare StateCommittee for Justice Fights for Free Speech via Property Rights
Return to Top