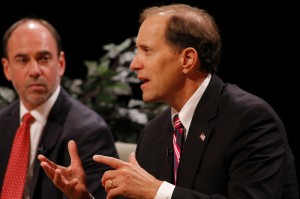 The government taxes different corporations radically different amounts and in significantly different ways. A new study by the General Accountability Office (GAO) examined “special exemptions and exclusions, credits, deductions, deferrals, and preferential tax rates” regarding corporate taxes. Some 80 different corporate tax structures are designed to “support federal policy goals” relating to energy, technology, and housing to charity and credit unions. The GAO found that these exemptions, exclusions, and the like “resulted in the government forgoing corporate tax revenue totaling more than $181 billion.”

These many structures in corporate tax rates create a wide disparity in the percentage of taxes companies pay. Fortunately, the House Ways and Means Committee is considering ways to lower the corporate tax rate, which is currently 35 percent (the highest in the world), and to simplify corporate tax structures by eliminating some, perhaps even all, of the exemptions, exclusions, and other complexities. According to Reuters, Dave Camp, chairman of the Ways and Means Committee, “said that all tax perks potentially were on the chopping block.”

In crafting the current reform, the committee would do well to remember the aftermath of the last major tax reform, in 1986, when Congress lowered rates and cut some “tax perks”—but not all of them, leaving the door open for the “tax perk” problem to continue and proliferate again. And, of course, that’s just what happened. “Since then,” notes Reuters, “the code has been larded up with special provisions.”

Taxation is a violation of rights and is entirely unnecessary, but as long as the government continues taxing corporations, the system should be as simple, impartial, and transparent as possible. Toward that end, and to pull the exemptions issue off the slippery slope it is currently on, Congress should eliminate all exemptions and the like; ban them on principle; sharply lower not only the corporate tax rate, but also the net tax take; and dramatically cut spending. This would be a step in the right direction.

View all articles by Michael A. LaFerrara →
Is Your State in an Economic Rut? North Dakota has the SolutionBenghazi Assault Was a Moral Atrocity, Not a “Sideshow”
Return to Top