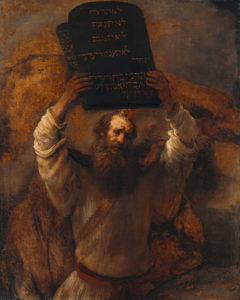 The Freedom from Religion Foundation recently threatened to sue public schools in the town of Muldrow, Oklahoma, if they refused to remove plaques inscribed with the Ten Commandments from classrooms.

Unfortunately, when Republican State Representative John Bennett weighed in on the controversy in his district, he upheld the popular yet false view that the Ten Commandments—and, more broadly, biblical morality—are necessary in order to teach children the difference between right and wrong.

Although Representative Bennett conceded that “the superintendent and local school board has no choice but to remove the plaques if they want to avoid a lawsuit,” he also warned of ominous consequences: “A nation that refuses to allow educators to teach children right from wrong will become a corrupt nation, where sin prevails, evil abounds and everyone does as they please.”

Surely children need to be taught the difference between right and wrong, and schools necessarily play some part in this aspect of children’s education. But educators should not turn to the Ten Commandments or to any other religious scripture for this purpose. Students should learn that stealing, lying, committing murder, and the like are wrong not because the Bible says so but because such actions are contrary to the requirements of successful living. Such lessons should be taught through the reading and discussion of literature, history, and science—not by posting contextless commandments on the wall.

As for having no other gods before the Judeo-Christian God, keeping the Sabbath holy, and the like, these ideas have no place in publicly funded schools. Of course, parents have a right to inflict such dogma on their own children (at least until the children reach adulthood), but they have no right to force religious dogma on other children or to have government force others to fund its dissemination.

Bennett should rest easy: Removing the Ten Commandments from the schools will in no way interfere with the ability of teachers to teach or students to learn rational moral lessons in school. It will only free them from some of the irrational ones.