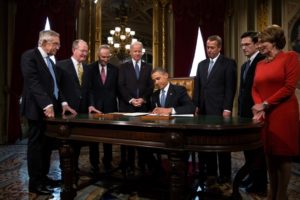 When members of Congress can gain financially by supporting, blocking, or rigging legislation that affects their investments, they have an unacceptable conflict of interests.

Last year, Barack Obama signed a law intended to solve or at least mitigate the problem—the Stop Trading on Congressional Knowledge (STOCK) Act. A major provision of the Act required “electronic reporting and online availability” of information concerning the investments of members of Congress and government employees.

When members of Congress can line their pockets by passing, blocking, or rigging certain laws, corruption unsurprisingly ensues.

In his 2011 book Throw Them All Out, Peter Schweizer details many cases of suspicious congressional investments. For example, in 2003 Senator John Kerry helped to write the health care legislation that became the Medicare Prescription Drug Modernization Act; that same year he and his wife made a total of 103 stock purchases and eight stock sales involving insurance and pharmaceutical companies. The Kerrys made millions in profits on those investments. In 2009, Congressman John Boehner purchased volumes of shares in five health insurance companies days before he helped kill ObamaCare’s so-called “public option” for health insurance. The relationships between Nancy Pelosi’s Visa investments and congressional rulings in 2008 are too complex to explain in a blog post; I refer you to Schweizer’s book for details on her dubious multi-million dollar gains.

Given that in our current political system congressmen can pass laws to manipulate the economy and profit thereby, it is abundantly clear that we need laws requiring full transparency of all investments made by such officials. It’s also clear that in the age of the Internet, when congressmen can make their investments online, citizens should be able to view those records online and should not have to travel to D.C. to do so.

But laws mandating such transparency and accessibility are only short-term solutions, and the more politically savvy congressmen will likely find ways around such laws anyway.

The long-term solution is a government limited to its proper purpose—the protection of individual rights. Under such a government, Congress would be constitutionally forbidden from passing laws that interfere with business in any way—whether to harm or “help” them. Achieving this state of affairs, of course, would require an amendment to the U.S. Constitution. What might that amendment say?

Toward the end of Ayn Rand’s novel Atlas Shrugged, Judge Narragansett writes a sentence that is likely sufficient: “Congress shall make no law abridging the freedom of production and trade.”

That should do it.