Review: After the Welfare State

The welfare state is in crisis. The promises made in its name are a mixture of wishful thinking and outright lies. It emerged as a mechanism of power; it displaced, crowded out, and crushed voluntary and participatory institutions; it enervated and atomized societies and undercut personal responsibility; it substituted dependency and patronage for independence and rights. In usurping from citizens responsibility for their own welfare, it has turned them into clients, vassals, subjects, supplicants.
—Tom G. Palmer (After the Welfare State [p. 52]) 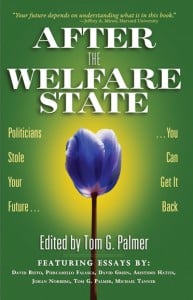 The modern welfare state began to take shape in the 1880s in Otto von Bismarck’s Germany, and it took off in the United States in the 1930s under Franklin Delano Roosevelt’s “New Deal.” Now that the welfare state is thoroughly entrenched throughout most of the world, is there any reason to question its existence or any way to eliminate it? There is a reason and a way, and these are the subjects of the essays in After the Welfare State.

The book, published by Jameson Books in conjunction with Students for Liberty and the Atlas Network (and available for download at no cost from either organization), features nine essays covering the history of the welfare state and some of the common criticisms of it. The publishers of the book intended it to be short (with only 136 pages for the essays), inexpensive (easily downloaded or shipped in bulk paperbacks), and readily available and accessible to college students. These qualities make the book a fine introduction to the history and problems of the welfare state.

In “Bismarck’s Legacy” (the fourth essay in the book), Tom G. Palmer (who also edited the book) recounts the Prussian roots of the welfare state. Dependency, writes Palmer, is not an “unintended consequence” of the welfare state; it is its primary objective: “All welfare states begin by rejecting the classical liberal principles of limited government and individual freedom. They create systems of political control over the behavior of constituencies through deliberately induced dependence, typically justified through one doctrine or another of collective identity and collective purpose” (p. 37). Or, in the words of Bismarck himself, the father of the modern welfare state: “Whoever has a pension for his old age is far more content and far easier to handle than one who has no such prospect” (p. 35).

After reviewing the Prussian origins of the welfare state, Palmer shifts to U.S. history and to FDR, who also wanted to make people easier to handle. The welfare state, writes Palmer, took an especially tragic turn in the 1960s under the so-called “Great Society.”

The result was not quite what was promised, as the proliferation and expansion of programs targeted to the poor, and most significantly, to black Americans, resulted in social meltdown, the hollowing out of American cities, the withering of the voluntary organizations of civil society, the evisceration of the two-parent family, rising crime rates, and unprecedented levels of youth unemployment. (pp. 42–43)

Today, writes Palmer, given the huge budget deficits faced by governments throughout Europe and the Americas, “It’s the end of the road for the welfare state” (p. 52).

That is the theme of several other essays in the book as well. Piercamillo Falasca offers a depressing account of the damage wrought by the Italian welfare state; Aristides Hatzis does the same for Greece. Michael Tanner (of the Cato Institute) adds a brief review of the status of welfare statism in Europe and the United States, invoking frightening statistics concerning government spending, deficits, and unfunded liabilities.

To me, the most fascinating part of the book is a pair of essays on the history of mutual aid societies, written by two leading scholars in the field. David Green discusses the history and importance of such societies in Britain; David Beito reviews the comparable history within the United States.

Green describes the basic purpose of the societies:

In Britain the friendly societies were the most important providers of social welfare during the nineteenth and early twentieth centuries.

The friendly societies were self-governing mutual-benefit associations founded by manual workers to provide against hard times. They strongly distinguished their guiding philosophy from the philanthropy which lay at the heart of charitable work. The mutual benefit association was not run by one set of people with the intention of helping another separate group; it was an association of individuals pledged to help each other when the occasion arose. (pp. 55–56)

Green and Beito explain the value of these societies, which individuals voluntarily joined and maintained, and which provided services such as life and health insurance. The authors also show that government regulations of the societies’ activities, along with competition from coercively funded government welfare programs, helped drive most mutual aid societies out of existence.

On the whole, After the Welfare State is an excellent primer on the history and problems of the modern welfare state. Unfortunately, the book does not deliver on its implied promise to describe how to end the welfare state and institute voluntary institutions in its place.

And, unfortunately, the book is ambivalent about whether it even advocates the abolition of the welfare state. Palmer concludes his first essay confidently: “We need to end the welfare state” (p. 14). Not all of the contributors to the book agree. For example, Hatzis writes that “perhaps” the government ought to intervene “carefully when there is a market failure” (p. 23), and later he explicitly advocates a welfare state, albeit a reformed one: “a safety net [only] for the misfortunate poor” rather than one that provides “lavish benefits for the [politically] powerful and the wealthy” (p. 30).

In his final essay, Palmer backs off from his confident call for the abolition of the welfare state, arguing instead that classical liberals (a group of which he considers himself a member) reasonably disagree about the role of government-issued welfare. Palmer writes in his concluding lines:

Classical liberal thinkers, despite often robust disagreement among themselves, have agreed that the creation of more wealth is the solution to the alleviation of poverty [sic] and that, because outcomes are not themselves generally subject to choice, just and efficient institutions are the key to increasing wealth and diminishing poverty. Moreover, although many make room for state provision of assistance to the poor and indigent, all agree that there is a hierarchy of means for the alleviation of poverty, cascading from personal responsibility and self-help, to mutual aid, to charity, to the least preferred option, state compulsion. (p. 136)

Thus, Palmer suggests, even though he personally wants to “end the welfare state,” his is merely one opinion among many, and he is not prepared to definitively rule out a welfare state.

Those looking for a consistent defense of individual rights will not find it in After the Welfare State. But those seeking to learn the basic history of the welfare state and some of the major problems with it will find the book a worthy resource.

View all articles by Ari Armstrong →
Review: The Year of Living Biblically, by A. J. JacobsReview: The Truth about Gun Control, by David B. Kopel
Return to Top