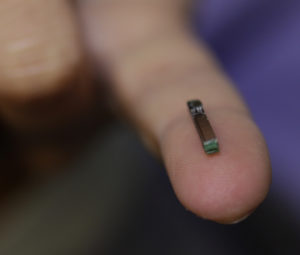 Scientists at Ecole Polytechnique Fédérale de Lausanne (EPFL) in Switzerland have recently developed a new medical implant device that works with a person’s smartphone or tablet to relay medical conditions to its receiver. The 14 millimeter device can detect a variety of chemical levels in the blood and warn its user or a doctor of possible medical problems—from high blood sugar levels in a diabetes patient to indicators of an impending heart attack. (In the case of a heart attack, a protein known as troponin is released into the bloodstream hours before a heart attack occurs. EPFL’s medical implant is potentially able to detect this.)

Although the device is initially being considered for monitoring medical conditions related to heart disease, diabetes, and cancer, other possible applications include monitoring the conditions of athletes, women in pregnancy, explorers in extreme conditions, and soldiers in action.

Congratulations—and thank you—to the scientists at EPFL for developing this life-serving technology.